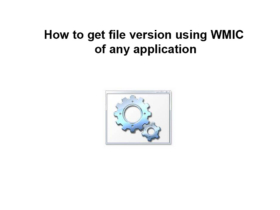 [Batch] How to get file version using WMIC of any application (*.exe,*.dll)

This article will explain the basics of boot configuration editor tool which comes with Windows Vista and above.

The Boot process has been changed in windows vista and above. Now the Boot loader (bootmgr) does not longer looks for boot.ini text file instead refer the binary store “bcd” from \boot directory of active partition.

BCD is a binary file which holds the information about boot configuration like number os OS ,Various boot parameters etc. We cannot edit the configuration file BCD with a text editor instead we have to use the inbuilt command line utility BCDEDIT.exe.

If you enter BCDedit /? On a command prompt you will see available options.

So, if you can see all the options and description just by entering bcdedit /? then what’s the mean of writing this article ?

Well, this article explains the basics of Bcdedit and subsequent articles will explains the different uses of using this CLI to make changes.

There are three main elements in the boot configuration: Store – Entries – Entry options.

A BCD store is the binary file which most often resides under \boot directory of the active partition. It can be created , impored or exported. By default all commands operates on the default store located at \boot directory until manually specifed . You can manually specify the store path by providing /store parameter.

Inside the store there are OS entries. Entries are the one we see at boot selection menu on startup like Windows 7 / windows XP / ETC. Each entry usually have a GUID. Specify the GUID when dealing with entries, By default the commands operates on default entry.

The most important part of configuration is entry options. It controls the startup like from where to look for the OS loader,the OS partition stuffs.

Lets take an example how can we manually add windows XP to Windows 7 boot loader.

Below commands will add a legecy OS loader like ntldr or some kind of linux boot loaders.

It will add an entry of the given name in boot loader,When you select it, the control will passed to ntldr or any other boot loader you specify (replace ntldr in 2nd command with the filename of alternative boot loader)